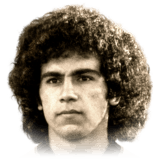 First thing first, I have to say this is a review from a Gold 3/2 player point of view. Most of the reviews out there are made by youtubers / content creators that running either a crazy RTG or multimillion-coin squad and they are elite players and trust me, following them never helped improved much specially this year.

Sanchez is a new Icon this year and none of us (specially the ps4 players) have any experience with him, the face stats are great but when you look at his IG stats, one bad stat makes everyone worry. 58 composure.  Let me tell you, I think it’s a typo, there is no way in hell or heavens that stat is even visible in game .

Shooting – 88 : it`s his best stat in my opinion. His finesse shots outside of the box are 90% in the top corner and no keeper can stop them, he basically shoots like Messi from that angle.  He got the correct shooing stats to land all that finesse shots from the sweet spot and he does them so effortlessly that caches any opponent off guard , he is basically the cheat code against PTB.

If you want to look a bit closely he got 85+ in shot power / long shot / curve . which I think are the most important stats to score the finesse shots from outside of the 18 yards.

His shooting can easily be compared to Del Piero and Messi .

I really liked his positioning as well, and helped with some of my greatest comebacks this year (comeback from a 3-0 down in 70” min to win the game 4-3, it felt so good, he had a hat trick)

The only thing I would say he has 3* week foot and I was forcing shots on his left foot a lot but I really need a left footed attacker and he was what I needed.

Pace – 90 : he has got 88+ in acceleration, sprint speed, Agility and Balance which make a meta this year, I don’t really need to explain it any more I guess

Passing – 78 : there is another twist in this face stat as well, he got 80 – vision and 84 – short passing and crossing. Which make his passing up top just enough for any one two passes, because of his 50 – long shot, his overall passing has been lowered but he never let me down with his passes.

Dribbling – 88 : it felt way more, because of his height. strafe dribbling with him even in a bad gameplay and bad server state was so easy .

Physicality -70 : as you all know this year, attackers strength is not a biggie in FIFA 20, our best players (Neymar, Messi, Pele) all have low strength and its not a let down for them

He has got 75 – Stamina , I played him in RAM roll and he was going up and down the pitch the whole game, I think this year any player with 70+ Stamina is usable , at least at this stage of fifa, so I never had to substitute him.

Recommendation : (this is my humble opinion) I picked him up for 760K last weekend and I needed a icon in the middle to link up my team together, he really did play up to his stats, don’t be scared of his low composure, its not effecting him tbh, and if thinking to spend your ICON swap tokens on him, I think he is up there in top strikers and he will be in your squad for months to come.