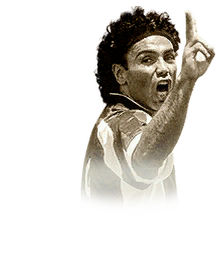 Firstly, can't believe I am the first to review him.

Straight to the point, I know why you are looking at this review - does that singular composure stat ruin what is essentially an amazing Icon striker card. In short, no, although I can't pretend it wasn't noticed here and there.

Caveats. I'm a very narrow player. Essentially I interchange the CAM and striker to play short 1 2s and play off each other, whereas my wide players don't get as much of the ball. I play centrally, so that may explain the inflated goals and assists figure. For example, if I score 5 goals in a game, chances are out of the 10 goal involvements, 75% of them will be the CAM and striker. This is what made me attracted to Sanchez - all the attributes I would look for in a striker, with the ability to pass and link up with the CAM. previously I have used Martinez, birthday Hazard, Firmino...you get the idea. Games were primarily seasons, with 10 in champions

PACE: Rapid both on and off the ball. With Hawk he has 97/98 which is easily enough to get through defences for through balls. It also makes him surprisingly good at harrying the opposition.

Shooting: The big one. A clinical finisher, up there with the best, although you would expect that from a player that has 99 in everything outside of longshots. Any space he has, it is going to test the keeper. Weak foot was not an issue, lack of traits was not an issue. The one slight caveat to this is the COMPOSURE. He doesn't hit that elite level like Jari Litmanen, Messi, Ronaldo, but is still very good. Put it this way, if you didn't know it was rated 87, you would probably put it down to user error. But because you know he doesn't have the 90+ you would want in an endgame forward, that one chance in 10 that he doesn't put away, and you feel like he should, you notice. Solution? Make space (he is very good at finding it) and then crack a shot out.

Passing: Unexpectedly very good. Short game and crossing was very good (he had a few stints out wide when I bring on Jovic for some more physicality), and he is good both out wide and playing slightly deeper. His long passing is what it is, so long hail Mary's are not going to be effective, but in reality you won't really be using this that aften. As mentioned above, when interchanging with the CAM, it was not a problem.

Dribbling: Outstanding, night on perfect, but lacking in the 4* skills we all crave. First touch, close dribbling, left stick dribbling, all excellent. You won't bemoan it.

Defending: NA, but good at harrying defenders as quicker and stronger then they will realise.

Physicality: With hawk, I was very impressed. His jumping and heading is arguably up there with some of the players I've seen (mainly because of how poor it is this year), but the power header trait is very noticeable. His aggression is very good, he fights for a lot of lost causes. His strength combined with his dribbling ability make him difficult to knock off the ball. One downside, the stamina - he won't run all game, so be prepped that he may tire out nearer the end of the match. Stay forward instructions helped.

In short, I paid just over 1,000,000 for him, and his finishing was well worth the money, as well as his ability to link play. Yes, his composure is slightly noticeable in game, and if you are a stickler for this stat, then this card may not be for you. However, if you can live with it, the goals he will be involved in will be well worth the value.

This man loves goals. Scoring a goal per game for me in division 2 on rivals and weekend league, I had to make him my first review on the site. I'd been keen to try Hugo Sanchez throughout FIFA 20 but the lacking composure on his lower versions always put me off. Thankfully, his PIM price drop led to me picking him up for around 1 milliion coins (he's even cheaper now!) and using him at the forefront of a 4-2-3-1. Whilst he's not one of the finest all round striker's in the game, I'd be hard pressed to find a better finisher for the price available. Headers, volley's, finesse or outside of the boot shots, he can do it all. His left foot is like a hammer and his right isn't bad at all either, you can be confident of scoring on either. Quick, strong and possessing good movement, Sanchez is the ideal striker if you're fed up of dominating the statistics on Weekend League only to lack that player to put the ball in the net. Behind this king I used Neymar, Messi and Di Maria and they all complimented him well, able to make runs off his body as he holds it up. I had great fun with this card and it far surpassed the likes of Butragueno (prime) and Dalglish (mid) in terms of finishing. If you rely on your striker to do more than be quick and able to finish, I'd consider one of the aforementioned strikers due to their 5* weak foot giving them improved creativity. However, for a man to put the finishing strike to your attacking moves, Hugo Sanchez PIM is a great choice.

The main pro is his finishing. Lethal from any angle, he makes full use of the near post overpowered nature to the game. Sanchez is also quick, agile and strong.

If cramped for space in the box with few attacking options around him, Sanchez can struggle to make chances for himself. To get the best out of him, it's important to use nimble creative players around him. Whilst the likes of Neymar and Messi are obvious picks, good budget choices may be screm Bernard or Lorenzo Insigne.

It is time to write my first review, just because this guy is so insane.

Yesterday i bought him, to play him as a CAM with engine. This guy really changed my WL.

Now after 12 games he scored 24 goals and gave 12 assists, i really never had a player in 15 years of FIFA who felt so smooth.

I played with Neymar, CR9, Messi, lots of other icons, i thought that Neymar was the most insane Cam, but this guy for me is just from another planet.