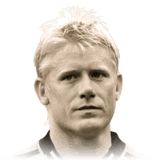 So I packed Peter in a prime Icon pack a month ago (I know RIP to me). Ive used him for roughly 100ish games, and for the first 20-30 games he was golden. I am a man utd supporter so I was actually fine with packing him as I wanted a new keeper anyways. But there were a few issues Ive had with him since the start. Despite being great for the fist 20-30 games he made this suspect saves which should have been caught or been parried out of the pitch. However, he would usually parry them straight back into the middle of the box which made my life difficult as it would result in a goal or would result in a dodgy clearance. If you are gonna go and buy a keeper who is an icon, you should really be going and buying someone like VDS cause he is just much better. I had peter on comes for crosses and being 6'4 I expected him to actually go and catch the ball or punch it out but in all actuality he would 50% of the time just leave the ball. My biggest issue with him though is that even with a basic, every stat pretty much maxes out (except speed) but he still has crap positioning to the point that even with the tightest angles he will just flap around like a dead fish when anything is shit at him and also will just sometimes watch the ball as it floats into the back of the net. I honestly don't know if its just me or if he is actually that dodgy but I do not recommend him if you are looking for a keeper. (Unless you supported United)

Hes big so most long shots should be saved.

Schmeichel is really good. good reactions and is definetly a game changer