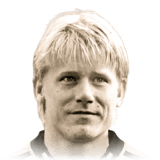 Ok Guys, every previous year I called this guy Shitechel for an obvious reason - any 75 rated random GK would perform at least as good (bad) as this guy.

This was the reason I did not even bother to try him this year for a long time. Another reason was packing TOTT Ter Stegen who is considered the very best GK in the game, well he is not ...

Schmeichel this year is superb, simple as that. Superb,magnificent, solid af, you name it.

Finally they did him justice. Its got to the point that if I need to use TOTT Ter Stegen for whatever reason, tokens, La Liga requirements, whatever, I instantly feel like I am missing my key man.

So many times Ter Stegen lets some shots in and I am like wtf Schmeichel would have saved it for sure.

After some games you get used to Peter so much, he is so consistent, also he is superb on the ball, very calm, you can easily use him if you play short ball and start your play from the back, his ball distribution is on another level to any other GK I tried.

Dont get me wrong, for a long long time my opinion was TOTT Ter Stegen is the best, but after trying Peter there is no coming back, he will be my GK for the rest of the year.

His very very strong attributes are reflex saves, one on one and rebounds saves and long shot saves. He does not have any weaknesses imho.

His price is funny because most people just like me dont even bother trying him being under impression it doesnt get better than Ter Stegen, well it does ...

Btw - this year's Shitechel award goes to Lehmann, his prime card is so bad its unreal, he has silly animations that make him let in every single one on one, tried him before buying Peter 90 card.

no idea really, he is so so solid, maybe he could have 5 star skills :)

Prepare to lose every game where you have 2-3 times more shots than opponents because he won't make anything except for basic saves. He won't catch crosses but he will hit them into dangerous areas for the opponent. Please save your coins and buy one of the meta GKs.