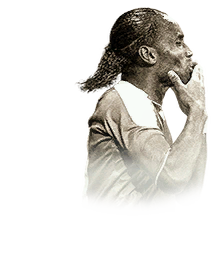 I've seen a couple of reviews on here but none that are recent and fit the market today. In a time of TOTSSF players and full sides including these, Drogba stands out. I am a G2 WL player and was bored of the usual meta and carbon copy teams which includes Neymar, Mbappe and a variety of red pick 96+ attackers that have every stat maxed so decided to switch it up. In previous FIFA's I have always preferred the solo striker formations and having a target man who has enough pace to get in behind if needed. In this FIFA no player I have used has been able to live up to this mantle, forcing me to use the 'meta'. Then came along Drogba... Decked out with a cool moments dynamic image and the orange boots he wore in that iconic performance against Munich, Didier was mine.

I am judging him on mostly WL and a few Rivals games here and there. Reading earlier reviews I see that the people who paid 3-4 mil for him were disappointed, comparing him to an expensive Harry Kane (I've used Kane and think he's a great player especially early game) and can understand this criticsm. I managed to get him at £1mil and at that price is a steal.

The man currently has 72 goals in 41 games for me and I am having the most fun I've had on FIFA this year. I think this is a mixture between using a player I love and his card actually now reflecting his value. I've used various TOTSSF players and in my opinion their stats do not show in game. Drogba is a beast. Strong quick and the best finisher I have used on the game. I recommend that you use an engine chemistry style on him, it gives a slight pace boost and also gives him +10 on balance and a boost in reactions. He is obviously not as agile as the likes of Mbappe and Neymar but his strength makes up for that. I think strength is a major draw on a card now with every defender being 90+ pace, you need a leveller. This man hits like a train and finishes like an archer. He is quick enough to beat the back line. A negative is his 4* weak foot but even then I may miss 1/10 on his left as long as you use power shots, his finesse from outside the box on his right is lethal when you get it down. I love a goal out of nowhere!

I can't recommend this beast enough, he has a certain aura about him as if you know you are using a legend. You feel it.

A final comment to point out is that his goals per game record is only bettered by TOTY Ronaldo when looking on Futbin. That tells you everything you need to know.

First of all, I'm sorry if my English isn't perfect as im not English myself. But lets start the review.

I all started when i saw the Kessie objective card that came out. I decided I wanted Kessie in my team and started to look for a way to get him in my squad. It turned out it was really difficult especially because of his nation. I stumbled upon this Drogba as I got his baby from the baby icon SBC at the start of the year and that card really suprised me how good he was. I decided to give this Moments Drogba a go, also because TOTS Werner just wasn't delivering for me.

So i bought Drogba because its near the end of the game and i just wanted to have some fun and not use the same players over and over again. Drogba suprised me again, but even better then the Baby version did at the start of the game. This card is absolutely fenomenal. I know he is not the most agile player, but this guy BANGS in goals. He is always in the right place at the right time and has a rocket in his boots.

His dribbling is a bit clunky and his skills feel a bit of, but as I'm more of a passing player then a dribbling player that was no big deal for me. His finishing from in and around the box is 99/100 en his left foot with the 4 star wf feels very good aswell. His passing isn't insane level, but is definitly good enough.

His physicals are very good, especially because he feels so fast in game (despite his height) he bullies almost every defender of the ball.

I used a engine chemstyle on him to boost his passing and his dribbling, his shooting and physicals are already maxed out.

I would definitly suggest everyone to try out this monster player. Everyone loves Drogba as a player and now the game is coming to an end is the perfect time to give him a go. 850K at this moment is an bargain for how good he is as a striker.

I know a review was posted on this card very recently, but I just had to share my thoughts. After packing TOTS Reus tradeable, I just had 1.3 million coins sitting on my account and I knew within a week I would have just blown the coins on packs. As an Irishman, I originally looked towards Kenny Dalglish, or George Best, but when I saw Drogba was 1.227.000 million, I had to buy him. As a boyhood Chelsea fan, Drogba was the first player's name I knew and it meant so much to get him. At first, I tried him in a 4-3-3, but I decided he needed a strike partner, so I put him in a 4-4-2 alongside Henrik Larsson. In the last 10 games of weekend league, he scored 5 goals for me on 3 seperate occasions, and I immediately fell in love. He doesn't have the trait, but it felt like the ball stuck to his feet, and don't even get me started on the sheer strength of him. One thing that really surprised me was his free-kicks, of 4 I took with him within 25 yards, I scored 2, including a 93rd minute winner. 4 star skills is fun, but the 5 star weak foot is a lie. I scored so many goals on his left and the shots felt so powerful. If he was in the 850-1 million coin rice range, he would be completely worth it, but 1.2 is slightly overpriced. Definitley worth it if you are a Chelsea, Ivory Coast, or just Drogba fan in general.

A little overpriced, a little too low on agility and balance but did not feel like a truck