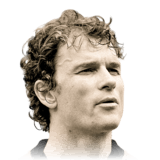 After MATS stopped fitting in my dead because of Pique just not being good enough, I've been on the hunt for a good goalie. I've tried Flashback Neuer, Alisson, Ederson, Futmas de Gea and they all dissapointed. I thought I had to alter my defense because of needing MATS. But since I am an arsenal fan I decided to give Prime Lehmann a go. Boy did he not dissapoint. I'm seeing save animations I have never seen before, and he flies like the beaitufl bird he can be.

Animations I have never seen before

Very big presence in the box

I am yet to find a con. Maybe the fact that he is German?

I bought Lehmann as 180k for a prime icon goalkeeper seemed like a steal. His stats also don't follow the normal distribution, with his positioning and handling being higher than his actual saving stats. This definitely showed in his performances, as Lehmann is like no keeper I've used before. He was exceptional at stopping the near-post OP shots that plague FIFA 20. Try as opponents might, the German would palm shots away from all players. As mentioned in another review, I also noticed animations from Lehmann I'd not seen from other keepers. His saves were always strong, I never had to worry about rebounds.

However, I always found that for how great he was at covering the near post, shots across goal were his downfall. Shots I'd expect an average 83+ goalkeeper to get a hand on flew past Lehmann. Whether this is down to his positioning or his diving/reflex stats, I'm not sure. He also was prone to messing up finesse shots, diving backwards rather than across to save the shots. All in all, Lehmann is difficult to rate. As a meta killer, he was amazing. For general use, he was solid but occasionally let me down and leaving me wonder how he couldn't save shots. If you have the coins, I'd give him a shot, but I don't imagine him being everyone's cup of tea.

Seems weak against across the goal shots

So in my prime icon pack I got Lehmann, I was not surprised at all but still it was a goalie so I did not really get mad about it. After trying him out for 45 games (mostly fut champs) I was really confused why he was so bad. He could not catch a ball even if the attacker had a very bad shot still Lehmann found a way to punch it away. He makes so little effort to shots, even if I move him to the correct position he still makes little effort to save it and the ball ends up in the net. I did much better with Courtois in the goal as he saved me many times.

In my opinion you should just get Ter Stegen or if you have potm Courtois use him. But if you need an icon goalie go for VDS or Yashin.

His build and characteristics are good.

Slow when running against an attacker

Very little effort to save shots