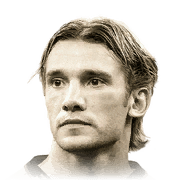 I used this card for just over 50 games and I'll tell you all he is an ANIMAL. In the 50 games he scored me 83 goals and they were from all distances and angles. He is hands down the best card ive uses so far and a great benchmark player for the rest of the game.

His pace is phenomenal and combining with extremely high attack positioning he makes outstanding runs and can keep away from defenders well.

By far his best attribute. When the ball leaves his foot you can see it break the sound barrier its so fast. Longshots of all types from all angles and distances are on target most of the time especially the finesse shots. Id say of his 83 goals at least 50 were outside of the box finesse shots. But dont be fooled this doesn't mean his heading and finishing ability are sub par, they are both excellent and he scored me plenty of bicycle kicks and headers.

His passing and vision are both pretty good and he can find his supporting players fairly easily, he doesnt cross to well but i cant say i was crossing with him too often as he was my main aerial threat. The highlight of his passing is his free kicks, the 90 stat does not lie and when you do a power/driven free kick it has a great chance to beat the keeper.

His dribbling isnt anything spectacular and is hindered by his lack of 4* skills. But he is fairly nimble and can beat most CBs but when you come up agaisnt an Umtiti/Ramos/Varane dont be suprised if you struggle

His physical definitley does the job but he equally isnt the strongest. He can get up to most headers with 86 jumping and being 6ft tall but he wont be beating the taller defenders from goal kicks all the time. His strength can be great at times but then feel quite weak at others (as most strikers do IMO) and his stamina seems low at 77 but he lasts all game as long as he has 85+ fitness going into the game.

Completed Sheva SBC two days after the release and since then he is my main striker. Played him in 3 squads over that period, but the formation was pretty much the same. To start, I must admit it was an unplanned move to do the SBC. The first two weeks were painful for me to cope with a striker that only has 3* skill moves. But every single game with him showed me that there are plenty more ways to utilize him and kill the opponents. And furthermore, since the patch that nerfed the timed finessed shots, he's been even better. But to be honest, I don't think he is a player for everyone. He's clinical finisher. All kinds of shots from the box are a goal, or at least 95%. That's why I think he is a game changer to some extent. Being able to score with only one opportunity and therefore win a game. I'll take it. He's fast and can outpace 90% of defenders in a fair run. He can score headers, he's not Ibra, but still, he will score with a good chance. With using him as a striker, I didn't expect him to pass like Pirlo in his prime. Short passes are more than sufficent, sometimes struggles with long passes, but you won't pass long with him. It's either shot or quick one-two. The lack of 4* skill is huge downfall, if we are looking for a perfect player, but Sheva is not a perfect player. He's a striker, elite one. He has the best driven shots along with Flashback Tevez I have used on this game. To sum up, he's worth the money. He gives you a guarantee of a goal per game. And I'm Gold 1/Elite 3 player and I play in Div 3.

Pace - for a striker it is more than sufficent.

Shooting - one of the best in the game I suppose. Just bangs it in.

Positioning - nothing to complain.

3* skills - obvious thing, but especially now in after abuse-finesse reality, can do damage without it.

height - he's not Peter Crouch and its difficult for him to win every header.

Pace: 88 pace is decent for any striker, top that with a chemestry style with boost and you can surely expect to outrun most defenders. But not ol´ Shev.. Despite his decent looking pace, he feels very slow in-game, where centerbacks such as Laporte and SIF Fabinho caught him all the time.

Shooting: Just a no from here. Compared to flashback Ibra he hits nothing og the post. Timed finesses from outside the box gous into the stands. open nets are guaranteed to hit the posts. The only value i have found from his shootings are his free-kicks, cause they are magical! However, free-kicks are lesser important in this case

Passing: 72 passing makes you wonder, whether he can make a good and key pass. The answer is no. Even with boosted passing he rarely makes an important pass that benefits the team and creates a goalscoring chance, and that´s unfortunate..

Dribbling: With good looking stats, the card looks promising, but again he feels clunky and slow, and the 3* WF does NOT work in his favor. The dribbling is clunky and he often falls over the ball.

Defending: Can´t defend, Does not intercept passes and contribute in defense.

Physical: His lack of aggression makes this card even more disappointing. He does not head anything in og chase a ball like other strikers (Ibra, etc). furthermore, his stamina is a huge letdown as well, meaning i subbed him out in the 70th minute with Mbappé, if i haven´t lost my mind over how bad the card is before hand.

So.. 160 games in, competing only in Rivals and WL and this card is just disappointing.. Don´t buy him. There are much better alternatives out there