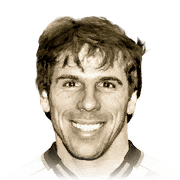 So I bought Zola about a month ago for roughly 900k. I had the coins and was looking for an icon. After comparing a few players I finally landed on Zola. My god was this the best decision I've made in this game. This man is an animal. Without a doubt the best striker I have played with so far this year. He can score from anywhere and is sneaky physical given his size and stats. I've noticed more and more often that he makes a decent amount of defensive plays. I want to also mention that I have the hunter chem on him, making his shooting almost unfair. In 72 games I have scored 54 times with him. He has been an absolute game changer. I noticed he works really well as the target man, he can make runs past the defenders but that isn't all that necessary because of his shooting ability he can score from anywhere near and around the box, not just on beating the defenders with pace. I'd recommend Zola to anyone who has the coins to get him and is looking for an icon. I think he is one of the best bang for your buck icons.

Shooting (all around)- finishing, long shots, volleys, free kicks, you name it Zola scores from anywhere

Dribbling- 4* skills, feels like the ball sticks to his foot

I did this man's SBC to replace Antoine Griezmann. Griezmann for me was the GOAT, perfect player, he had finesse shots, pace, he was incredible. Zola is from another level, his 92 curve, 92 finishing, 91 shot power and 90 longshot. This man shoots bombs from everywhere and his weak foot feels like 5 stars(unlike griez's that felt like 1). His shooting is not his only strenght, with a hunter style he is a lightning bolt with his agility and height, plus his passing is perfect. Get him.

Only thing this card suffers is stamina, around 70th minute you prefer putting someone else.