Moving onto La Liga and a dominant display from Real Madrid is heavily reflected with a third of the side coming from the champions. While a rejuvenated Barcelona, defensively solid Sevilla and an overperforming Betis make up most of the remaining places. It looks as though EA is once again limiting the spots and thus, I have cut down to 18 for this prediction to make it more realistic of the final outcome 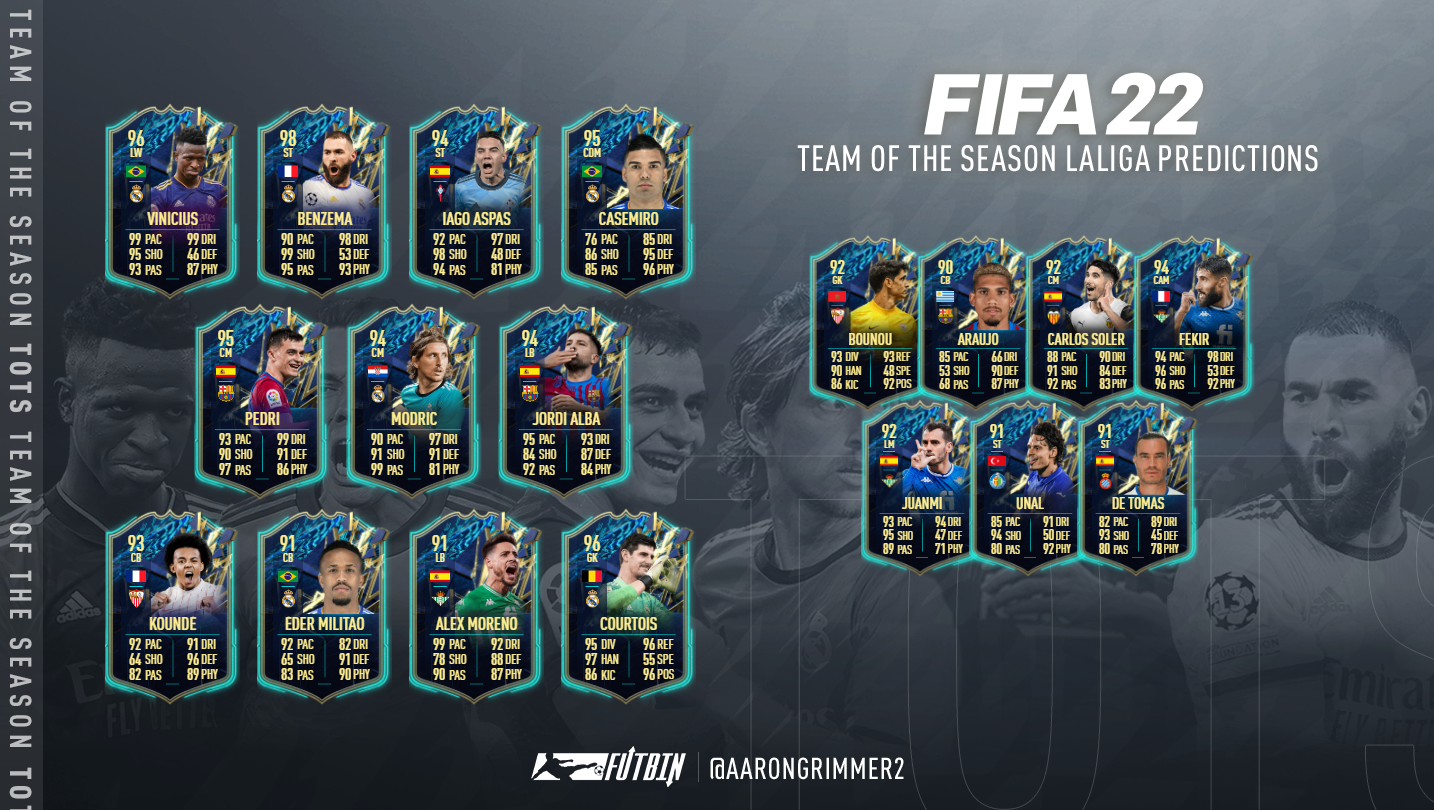 Thibaut Courtois – GK - OVR 89>>96
Often with the top end clubs the goalkeepers are very good however they don’t have much to do throughout large periods of the campaign. We saw last prediction that although Alisson and Ederson are arguably the two best keepers in the prem, neither of them actually made my prediction. Courtois however has a lot going his way. The Belgian has the second-best defensive record in La Liga but the real gamechanger is the fact he has been awarded an official POTM. It is very difficult to achieve that as a goalkeeper and thus it shows just how important he has been for Madrid at times this season when you link that with the defensive record it is difficult to argue against him for this side

Jordi Alba – LB - OVR 86>>94
Barcelona was in all sorts of trouble heading into the season and results were shocking at times during the first half. Xavi has revolutionised the squad though and given them hope once again. To finish second in the table while playing attractive football is quite remarkable. Xavi has done a spectacular job for them and it will be interesting to see what they manage in the 2022/23 season. The first of many Barcelona players included in this side is Jordi Alba. The Spaniard has been a consistent threat down the left-hand side of the pitch providing nine assists in total, putting him joint third in that category.

Eder Militao – CB - OVR 82>>91
There are some crazy defenders in terms of FIFA in La Liga this season, Militao is another and should he get that TOTS boost I can only imagine how expensive he may be. The Brazilian struggled with life at Madrid during his first few seasons but seems to have developed his game and is now a first team regular and looks set to be for many years to come. He is among the highest average rating for defenders in the division this season and deservedly so makes his way into this side.

Jules Kounde – CB - OVR 83>>93
The amount of talent France possesses in almost every position is simply ridiculous the central defenders are no exception. I expect Kounde to make the spot his own eventually but as it stands, he competes with several other names. Sevilla has the best defensive record in the division and should get recognised for that as a result. Their whole back four is on EA’s list but despite that, I feel that it could be only Kounde that ends up making the side.

Alex Moreno – LB - OVR 78>>91
This one's a bit out there as I am unsure as to how many non La Liga watchers will actually vote for Moreno but the work, he has done for Betis this season has been superb. Moreno has been a constant threat down the left-hand side and with limited RB candidates I see no reason as to why EA can’t include two LB’s instead. The Spaniard has five goals and three assists to his name while also recording more than respectable defensive numbers.

Vinicius Junior – LW - OVR 80>>96
It was never a question of if Vinicius would perform at the top level but more when it will happen. 2021/22 has been the Kickstarter with the Brazilian recording 14 goals and nine assists from the wing. There have been moments of magic on a regular basis and he will Definity be at the top of the game for many years to come. With a POTM, two IF’s a headliner and a TOTGS card the upcoming TOTS will go down as one of the best FIFA cards of all time.

Casemiro – CM - OVR 89>>95
From an attacking talent to a defensive wall. Casemiro is one of the best in the business for what he does. This would be his sixth consecutive addition to La Liga’s TOTS which for a player who is not within the goals on a regular basis is quite impressive. Madrid has dominated the league and it is their attacking prowess that will get most the plaudits but Casemiro is one of those gems that without the team would not be able to play the way that they do.

Luka Modric – CM - OVR 87>>94
Funnily enough, I don’t actually feel that Modric deserves a TOTS spot but with the side being fan voted and that magnificent assist fresh in people's minds, the likelihood is that he will be voted for and seeing as I am predicting what I think the side should be rather than my opinion on it I simply cannot ignore Luka Modric. The Croatian has been a generation talent really and at 36 years of age to still perform at the level he does is seriously impressive. I can’t see all three Madrid central midfielders making the side and thus by elimination I have Kroos missing out.

Pedri– CM - OVR 81>>95
Barcelona’s youth influx this season has been ridiculous with multiple names, some as young as 17, breaking through into the first team set up. Pedri is 19 years of age and already showing the world exactly what he can do week in week out. Now with just 12 matches played this season his addition to the list is somewhat questionable however there is a ridiculous amount of hype surrounding the youngster and his performances albeit a small number of them have still be enough for him to be noticed as one of the best in the division this season.

Iago Aspas – ST - OVR 82>>94
Aspas is one of the very few players who pick up IF’s for a singular goal as a striker and that’s down to how much he does for the side outside of his direct contributions. When Vigo wins, Aspas is usually one of the highest rated players from the game, goal or no goal. That being said the Spaniard still has a very respectable 15 goals to his name which is a tally that should secure his spot even without the additional benefits he has.

Karim Benzema – ST - OVR 89>>98
If you were to say that Benzema would be a strong contender for the Ballon D’or at the beginning of the season you would have been laughed at but the underappreciated Frenchman has been phenomenal on the biggest stage, Madrid look set to lift the La Liga title and are deep in the Champions League, largely thanks to Benzema. Should France go deep in the World Cup I would have Benzema as one of the front runners for the award. As for La Liga’s TOTS, there is no question whatsoever. Benzema has recorded a total of 26 goals and 11 assists from just 30 matches and is currently in the lead by 11 goals for the golden boot.

Yassine Bounou – GK - OVR 82>>92
Although Oblak will be a popular choice I believe the voting will work with the first keeper being fan voted while the second will be selected by EA. I fully expect Courtois to be the first as he should be and then the second should realistically be Bounou. Sevilla has the best defensive record in the division with a remarkable 28 goals conceded from their 34 fixtures. Bounou has been a large part of that success and thus has a great shout at a TOTS item.

Ronald Araujo – CB - OVR 77>>90
Araujo has solidified his spot as Barcelona’s defender this season somewhat easing the pressure on when Pique leaves. Barca fans will be happy to see how consistent Araujo has been for them and after an era of Pique and Puyol, it is always going to be difficult to move on in that department. Signs have been promising though and the Uruguayan is also adding goals to his game, with 4 this campaign.

Carlos Soler – CM - OVR 82>>92
Although statistically, his stats are somewhat padded from penalties, Soler continues to manage double figures each season, with eleven goals and five assists to his name he has been one of Valencia’s stand out performers, which has been needed as they have struggled to progress this season and currently sit down in 10th position. I can’t see Soler being too popular among the fan vote but I fully expect EA to include him one way or another as statistically speaking he is an easy addition.

Nabil Fekir – CAM - OVR 84>>94
For those that have used Fekir this FIFA already knows just how good this card is going to be upon release and the best part is it is very likely to happen. The Frenchman has been a huge part of an overachieving Betis side who currently sit in fifth place, fighting for a European spot. With six goals and seven assists to his name, Fekir has been providing in both categories but even outside of those statistics the work he does for the club really shouldn’t go unnoticed.

Juanmi – LM - OVR 75>>92
Most of the familiar faces top the La Liga table but one side that has stood out is Real Betis. Although they won’t get much love in this side one player who simply must get in is Juanmi. With 14 goals to his name, he is currently the fourth highest scorer in the division and with two IF’s plus a POTM card to his name it's clear to see that he has been a huge part of Betis’s success this campaign.

Enes Unal – ST - OVR 75>>91
There was some early hype for Unal who was contracted for the likes of City and Villarreal during early parts of his career and although he has gradually gone backward in terms of side quality, he is starting to perform to a level expected of him. Getafe has struggled this season and without the Turkish striker, I dread to think where they would have ended up. With 15 goals to his name, he has scored almost half of their goals, practically securing their status in the division for next season.

Raul De Tomas – ST - OVR 79>>91
There were a couple of strikers you would not expect in a La Liga TOTS, De Tomas being one of them but the Espanyol striker is currently joint second in the golden boot race, with 15 and thus an easy selection for the side. Espanyol look set for a respectable mid table finish and with De Tomas contributing to just under half their goals it's clear to see who the talisman is for the club.