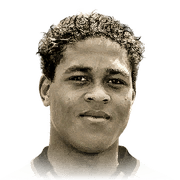 I saw that there was only one review on this card, which is rather negative. Having used him for 100 games now, I wanted to provide a bit of a different perspective, because for me, he has been a game changer. That is not to say that this card does not have its downsides and sometimes does not feel "iconic". I bought Kluivert after having tried base MVB, and it is clear that Kluivert is the lesser finisher, sometimes missing chances that simply should have been goals with any player. However, his strength, pace, positioning and amazing headers make it so that it does not really matter if he misses the occasional chance, because he can score in so many different ways and gets into scoring positions so often. He is fast enough for balls over the top sometimes, can score timed finesses from outside the box, low driven shots nearly always go in from within the box, he can volley balls in, scores near post headers from corners, his chip shots are incredible and so is his regular shooting with both left and right. That being said, his true value for me over MVB is his 4 star skill moves and better passing, which makes him so much better for me in link up play. His scoring aside, Kluivert has just really made my whole team function better by keeping hold of the ball upfront waiting for other players to make a run. I never had a player with a positive goal ratio before, but Kluivert managed to find the net 133 times in 100 games and also assisting another 35 goals. As I am running a fully Dutch squad, safe to say he is never leaving my team, unless maybe if I upgrade to his prime version.

Pace (no Auba, but fast enough)

Stamina (never had any problems with that, can always finish the match for me)

Composure (misses quite some chances)

Dribbling (can feel heavy on the ball)

So, as many of the gamers reading this review, I was looking for my first icon ST on a budget. After tons of comparisons and icon profiles visits in Futbin, I went with Kluivert 88. My main reasons to do so was his heigth, pace and passing combined with clinical finishing and the right work rates. The fact that we're both Dutch, was the icing on the cake and on we went.

I was looking for a strong ST, as I prefer to play with two strikers where one is very mobile and quick, and one is strong and good at headers. Therefore I put a marksman chemistry style on Kluivert, leading to the following impressive stats:

My fellow gamers, Kluivert delivers. Kluivert delivers. He is an actual game changer for me. I went from 14 and rarely 17 wins in WL to 17 and rarely 20 wins in WL by just adding this man to my team. He is fast enough, especially for a strong and tall striker. He scores a lot of goals, and crosses are seriously insane with him in the box. Corners feel like penalties if the opponent doesn't adequately know how to defend them. He always shows up at the right time to bang them in, whether it's from a cross or a rebound. His long shots are good as well with the +10 boost from the chemistry style. The work rates of Kluivert are perfect for a striker, with low defending and high attacking. This means that he won't waste his energy on coming back to defend, and that he will use all of it in offence.

Maybe even the best feature is his involvement in the attacking game. Previously, I was using Belotti IF who was insane for me, but was only good as the end station of an attack. Kluivert has solid passing and is able to put other players in goal scoring opportunities and this leads to a lot of more options in your game play. Kluivert will win 95% of the headers for you. When I'm under pressure, I boot the ball to either Kluivert or Perisic 87 and I head the ball to a midfielder / attacker to continue the build up from there.

It's not the perfect player of course, as to be expected from a player of 600k (I bought him for 645k, and never regretted it) His stamina is 79, which is enough to last a game but not the highest. Balance is only 75 and his composure is 81. This will lead to Kluivert being pushed off the ball more frequently than you'd expect, and to miss a sitter every now and then.

However, he always leaves his mark on the game. I've played him for 104 games and he has scored 111 and assisted 64 which means that whether he scored or assisted, he did either of the two in most games. This was all in either WL, rivals or online single matches (Vrsaljko objective) and maybe 5 squad battles on legendary. I recommend Kluivert to anyone looking for a strong icon ST that can contribute to your offensive options and gameplay.

Like in title, something is missing. I packed him a couple days ago and i just couldn't get used to him. He was playing alongside with Aguero who absolutely outshined him. His passing is good, as well as his dribbling (he feels heavy tho) but his finishing isn't really his best attrbute. I can also admit that his is very strong in air and can win a lot of headers. He usually used to finish the match without being completely out of stamina. I think he is not worth the price and often used Aguero, Auba or even Lukaku are similar, if not better than him