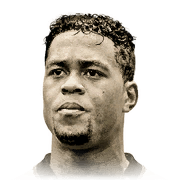 A real beast. He is unbeatable in the air due to his strength, height and jumping ability. On the floor he packs a really powerful finish.

Also, unlike other aerially-gifted strikers, such as Giroud or Gignac, he is reasonably fast. I pair him with Aubameyang and they both dovetail perfectly to enable me to reach Gold on Weekend League easily, despite me not being a very good player. He is the best partner for Aubameyang not just because of his physical presence, but also his passing stats. They enable him to do quick 1-2s and play perfect through balls for Aubameyang to race onto.

Bought him for 1.3m but if I were to estimate his worth, I would say he's worth at least 1.5m. Tried Lukaku, IF Lukaku, and he is so much better than all the versions of Lukaku. I would say he takes the best of Lukaku and Kane, and packs it into one potent Dutch package.

I cannot recommend him enough.

1) Very Strong, not easy to shrug off

2) Good passing, which is rare for a player who is tall and strong in the air

3) Height + jumping and heading stats makes him a real beast in the air. Has the Power Header trait too

1) With Hawk chemistry style he is quick enough, but he isn't Aubameyang-quick

After reading a lot of comments under his page and some reviews this player didn't particularly impressed me. Before Kluivert I was playing with IF Gabriel Jesus (I will always love you bruh) but since the finesse shot meta is coming to an end I decided to try a more physical striker to avoid the "finesse spamming" and play a better game.

Needless to say, I've never used a player as complete as Kluivert. He made me fall in love in a couple of seconds.

As you can see from the stats Kluivert is a clinical player. After 28 match he scored 36 goals and 15 assist. And I'm just an average Elite 3 - Gold 1 player.

I've uploaded a short vid on YT with some highlights from the first 10 games played with him, check it out!

I don't really know what to write here.

As someone who really appreciates a fast & strong striker, I expected a lot from the prime Kluivert. While he definitely felt fast enough and extremely strong in the game, he also felt oddly sluggish. To elaborate a bit more on this, he can run straight pretty fast without the ball, but with the ball - especially when involving some lateral movements, his movements seemed a bit awkward and sluggish. His shooting was obviously better than all of the non-icon strikers that I've used so far, but in comparison to other icon STs, it did not stand out due to a small degree of inconsistency. I had several occasions where I missed relatively easy low-driven shots that I would have scored with other icon ST options. And because of his sluggish movements, it was harder to get him to shoot as well. I definitely realize that a lot of different factors could have contributed to this (my own skills, playing tendencies, formation, etc.) and want people to read this review with a grain of salt. Having said that, I personally would NOT recommend spending 1.25-1.3 million coins in buying 91 Kluivert as there are many alternative options with much better cost-effectiveness.