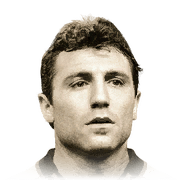 He has an incredible shot with his left foot. He won't miss inside the box. It is a shame he only has 3 wf stars. Also, he has a perfect first touch pass, which is necessary for a striker to pass and run. He also steals a lot of balls, he applies pressure to defenders. He is fast, not as other players like Butragueño or Hernandez, his pace feels like 85 which is very good

After hundreds of games with 88 Shevchenko (which I also reviewed on this website, go check it out if you want :) ) paired with CR7, I realised that his passing stats are really a problem because it forced me to use CR7 as a CF and less as a finisher (which I didn't like to do).

So I searched for the perfect icon ST/CF/CAM to put as a left ST in my 41212 (2) squad, following a small checklist :

And guess what? Hristo Stoichkov has it all

At first, it took me a while to adapt my gamestyle to this card, but it has been 100% worth it. Stoichkov is a BEAST (read this with KSI's voice).

I was looking for a ST who can also deliver some great pass, a ST with the ability to finish EVERY occasion, or at least get a lot of shots on the target, and also get involved in the transition, the creation of occasions, and most importantly the setting of counter attacks. And DAYUM he is good at all of these.

I used Hawk on this card and IMO it is the best option as I put him as a ST ,way better than HUNTER which is for pure *cough* PACEWH*RES*cough*

His passing stats are great for a ST. His freekick accuracy got him a fifth of his goals. His great vision and his good short passing stats allowed me to do some great combinations in small areas with 88 Reus and CR7, and it got me a third of all of the goals I scored since I bought him. His curve is deadly when it comes to finesse shots. His crossing is really great, he is the one shooting my right side corners and he got a lot of assists because of CR7's headers. I am completely satisfied with his passing stats.

I also tried Engine for a couple of games, and it was good, but use it only if you want a pure creator, which was not my case.

About his shooting, same thing that I said about 88 Shevchenko: outside the box, finesse or not, get the perfect angle, with the right power, and there you go (I don't use timed finishing). Inside the box, play with his balance and strength, get him on a good angle and GOOOOOOOOAL.For me, his left leg is a mix of an RPG7 with the accuracy of the Intervention M200 (MW2 memories <3).

I don't use a lot of skills in game (even with 5* skills players like CR7, i'm not a good dribbler TBH), but I think that his 4* is helpful in some situations. His dribbling stats are really decent for a ST, but you should go for another chemstyle than Hawk if you want to use him as a CAM,

His ball control is really good how it is, he can hold the ball and win it back quickly with his great agility. His 89 agility feels sometimes like a 93+, you just have to put a through ball and he will get it. His 85 reactions feels more like an 88+ in game as well. I got really surprised with that.

Physical stats boosts are important for this card, especially with his 77 strength and 81 balance. After a hundred of games, I figured out that my opponents were kinda surprised by Stoichkov's strengh, particularly when I easily bullied their PL defenders.

Why? 93 acceleration + 82 strength + 99 aggression, combined with his base 89 agility and 82 stamina, and you have a wild dog who's going to look for every sign of weakness in the opponent's defense, and even win the ball back.

His stamina is also good enough for a ST, as long as you don't spam constant pressure for 90 minutes.

His heading stats are good enough for a 178cm (5'10") player, when it comes to make accurate enough aerial passes, but don't except him to score a lot of headers... OH WAIT even 86 Lucas with 54 heading accuracy can score headers, with the power of TIMED FINISHING (yeah i'm not a timed finishing merchant so

The biggest problem I got with this card was his 3*WF. If you got used to a player with 4*WF or more, you will need a bit of time to adapt, like I did. In 75% of the games you will need to find a way to put him on his strong foot (which is the left foot), in order to be as much efficient as possible, even if inside the box, his right foot is not that much of a problem.

Also, I payed 1 million coins on PC, which might be a bit too much for some people. IMO this price is understandable regarding the current state of the Icon market, but I don't suggest you to get this card unless it is for really less than 970k (as at 26 of December, he is listed for around 990k-1mil, he might drop in price so just wait to get him)

Not being a huge FUT fan, this man is the first icon I could ever afford, and I don't regret anything about this card. I was looking for a skilled, balanced player who had decent delivery enough to play as CAM, but also had deadly finishing and dribbling abilities to score on its own when cutting back from the wings, and this lad has it all!

He might be a bit small to play as a striker but I would definitively recommend it as a CAM in this year's 4-2-3-1 formation.

Shooting : Deadly precision, good enough shot power and an incredible composure, this boy has the perfect mix making sure there is just the space for the ball to go in it will go in

Positioning : Always in the right place at the right time, and his runs are a nightmare for the opponents

Dribbling : Excellent control of the ball, very agile to make those turns and sick step-overs, and the 4* skills is a major bonus for him. Also, the ball seems glued to his feet, so that even after being tackled two or three times in a row he will manage to keep it which is quite amazing (probably due to the 92 aggression stats)

Passing : Really decent passing, probably won't work as a playmaker but if you have a player such as 90 De Jong providing the good balls it's not an issue. He can center well and easily find your striker if not too far away. (His free-kick accuracy seems mad but I haven't tried it as flashback Villa is even better)

Pace : With hunter as chem style is is faster than most of defenders, and his pace combined with his aggression makes up for the lack of strength

Strength : might be an issue if you want to hold the ball

Height : if you use him as a striker he obviously won't score a lot from headers