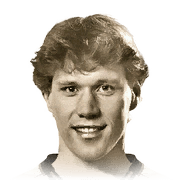 Needed a top rated striker for my team, van Basten definitely was the answer.

Guaranteed goals with shots from inside the box.

Pace : Putting a hawk in him does enough to boost his pace.

Shooting : OP stats for shooting, his goal stats speak for itself. No weakness in any aspect of shooting.

Passing : His passing stats are his lowest but he does not seem to misplace any passes. As a ST, it does not cause a lot of problems.

Dribbling : Quick and agile. Easy to move around and beat defenders if dribling is your game. Skill moves are only 3 star though.

Physical : Not the strongest but can hold of most defenders to make the shot.

His jumping is also one of his best stats. He will out-jump everyone to get that header in.

Stamina drops a little towards the end but it does not affect his shooting. Can change the game with his shots at any time of the game.

1.Shooting. His finishing is his weapon, has a strong weak foot too.

2.Heading ! He will jump over everyone and with his 90 Heading acc. you dont have to worry.

3.Dribbling. Quick and agile, can beat defenders if dribbling is your game.

1.Pace (low for the coins you spend)

Last year I tried some Van Basten card (not the prime card) and it was a big disappointment. I sold him very quickly and lost coins.

This year I was afraid of spend coins with him, so I tried a lot of strikers:

- The striker I most used was Aubameyang and he is really really good! He is the best striker at PL in my opinion. Anyway, I wanted someone more clinical so I tried other cards;

- I tried Salah SIF (ST, red card), but Salah didn't work for me in that position for many reasons;

- Then, I used Alan Shear prime, and it was a really good experience. I think Shear is the second best striker I used so far (better than Auba);

- After that, I bought Raul prime and it was a big disappointment. I sold him very quickly and looked for a new player;

- Now I playing with Van Basten prime card and it's very easy to say this card is the best striker I played so far. This card has something special.

-- Most of the times you shoot inside the box you score. Just try to find a space and Van Basten will score a powerful goal;

-- Check goal stats at futbin. One of the bests scoring;

-- Very good positioning. He tries to find free space most of the times;

-- Powerful shoots outside the box can help you with unexcepted goals;

-- Finesse shot special trait. Nothing more to say (but he is not Messi for sure);

-- He can score with both feet (anyway is he better with right foot);

-- Amazing in the air. Very useful at crosses and corners;

-- He is big and heavy, anyway you don't feel him like a truck. He is agile and can score acrobat goals;

-- Only 52 aggression but he is always fighting and running;

-- Not the best guy passing the ball but better than most of the strikers.

-- He is faster than I expected but not the faster (btw with hunter I don't feel much difference if I compare with Auba);

-- 3 stars skills. For me it's a not a problem, I prefer dribble with wingers;

-- Only 78 stamina looks really bad for 90min (or 120min). Honestly, I don't feel Van Basten tired in the game. I sub other 3 players and still with him on the pitch with no regrets... He his great at extra time and I feel no difference at all.

Played strikers like Messi and Butragueno who were able to carry the ball from the middle of the pitch to the goal line, Suarez and Lewa who performed so well in the first few months of the year and was also decent later, Carniball Inaki Williams and Bale who ran and score, ran and score. Prime Raul who was such a disappointment. And there were CR7 who is too meta and expensive for me but is a goal machine.

After all these popular strikers I looked somewhere else and bought Marco. I paired him with Flashback David Villa up top in a 352 formation and let the magic happen. This striker duo is the most enjoyable for me of the year and maybe all time. These 2 legends complete each other so well however Marco became the main man and Villa has a support role.

He's not fast nor slow. He can't outrun defenders but you won't feel him slow or clunky with Engine. Sometimes he will manage to get in behind defenders - they won't catch him. If you rely only on getting behind and pacy players he's not your man.

Honestly his shooting is the best I've ever seen. It's better then CR7's. (Haven't tried R9 though.) Only can imagine how good his moments card's shooting is. The best thing is that you don't need any chemistry style to boost his shooting so you can boost elsewhere. His positioning is fascinating - he's always there. Finishing is superb. Sometimes his long shots hits the post or go just over the bar but you can't expect goal from every shot...

Stats would suggest a way worse passing than 4 out of 5. However his passing is good. Not outstanding like Messi's passing but still very good. He doesn't really miss a pass and has many great assists. Maybe it comes from the Engine chem style maybe not - I honestly don't know because I never played him with different chem style.

74 agility (84 with Engine) is the first bad stat which makes this card a 'meh' for many FUT managers. Unfortunately every tall players have low balance but I think it's right. Imagine Bale or CR7 with 85+ or 90+ agility without boost... They would be unstoppable. However Marco doesn't feel clunky. He's (very) far from a Messi like dribbler but knows how to play with the ball. 95 reactions and 92 composure is a dream. He will react so fast for rebound situations and will score even if 2 defenders are on his neck.

You don't want to defend with him. However sometimes he manages to get back the ball or intercept in the attacking third of the pitch.

85 jumping with his height and 90 heading accuracy. Feels very good in game. He scores so many headers from corners or from crosses. 82 strength with his character model is enough but he won't win you every physical duels. Meta defenders can push him off the ball but they can beat even Flashback Ibra... Still he will won some 'battles'. 78 stamina is more than enough. He can play 2 games in a row without fitness card or subbed off (maybe even more but never tried). His agression is low but unfortunately every icon STs have low agression... To be fair only Suarez and Lewa has relatively high agression. Don't know why because I think that a good number 9 has high agression in real life.

Haven't mentioned his work rates, SM and WF yet.

Well M/M is the second reason why many FUT managers look over this card. I feel that in game with stay forward and get in behind instruction it's not a problem at all. He's always at the right place and is ready to score if you give him the ball.

3* skill moves... this the third reason why many of you won't buy this card. Can't say a lot about it - you know what it means. No Iniesta skill move or el tornado. I don't think it's a con or he would be better with 4*. You don't really want to dribble past defenders with him. If you do than this card isn't for you.

4* weak foot is not bad. His left foot is good and you can rely on that. But obviously he will miss more chances with his left than with his right. Villa's or Butragueno's left foot is better.

Overall it's a very good card I think and it will be good even if TOTS comes out. You can really feel that you play with an icon. He's a true icon. For this price he's one of the best strikers in the game. Obviously CR7 can be better if you wan't to use skill moves or want to make more runs behind defenders. He's really not for everyone. But if you don't rely on pace or skill moves than this card can be your main - like became mine.

Review came from gold 1 / division 1 player. Only used him in divison rivals and WL.