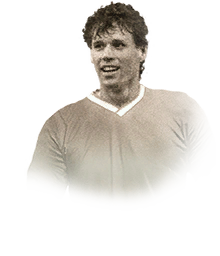 Well, after a little search finding the best baby icons that I could pack in the end of the month in the garanteed pack of fut swap, I realized that the probablity of packing something that could enter my team was very small. So I start searching the best( and affordable to my budget) icon sbc's. The one I imediately knew that was made for me was Van Basten, amazing shot, great height and strength, nice composure and dribbling.

I decided to make the loan sbc of him and I started him right way.

I play only 10 games with him but it was enough to understand his pro's and con's and to know if he was good to me. I play all the games in Rivals, division 3

He was great, some things weren't amazing, but he is a game changer, he made the entire difference, making me win 9 games, drawing 1 and only losing 1

He is not mbappe, but honestly no one will buy him because of his pace.

He is fast enough to get behind the defenders and his positioning and runnings for the long passes are pretty amazing. Once one of my mifielders put the ball behind the defence no one could reach him. And that for me was more than enough. I don't play crazy runs like the players that use Auba and players like that.

Perfect. No more to say. Just don't miss the shot, far or close to the goal. Just amazing.

The long pass isn't very good but it's not the worst because his vision with the catalyst is very good and helps a lot.

The rest of the stats of pass are really good and he plays very well to the team too.

Very good agility, really helps, he is very high but still fast because of that.

Composure: one of the best things about him, very very consistent

But his heading is really good. In corners, even in difficult positions, he can put the ball in the back of the net easily.

He only has 80 stamina but for me it's more than enough, can last the entire game in good conditions.

Could have a better long passing, but I think i noticed that more because of my style of play

I did this SBC prime moments icon Van Basten as I started to get a lil bored of having loads of different teams and I wanted a player I can use in any team. I decided to choose Van Basten as I saw that 98 shooting and I thought he'd be immense. 6 foot 2, can head the ball, good strength, immense finishing, composure... I knew he'd be a perfect out and out striker that I can rely on to put away even the most difficult chances

To do this SBC it cost me around 1 million coins on Xbox so it isn't the most expensive SBC especially for what you get in return, some good packs and a great striker.

I played with Van Basten in Division 1 and he does have a great goal/game ratio and occasionally creates for others. I would recommend this card if you're looking for a consistent target man/finisher however, that 91 dribbling can be deceiving as that 75 Balance really shows negatives in this card, so if you're looking for a fast, agile striker I would recommend against this card as there are plenty of alternatives for much cheaper.

Now his base pace stat is 85 which looks quite attractive in a striker, a bit of pace however, but his you do feel that his acceleration lets him down especially if you look to play in behind the defence. I used engine on his to boost his Balance but his pace goes up to 90 with this chem style but he still felt quite slow when he accelerated (Could be the difference using a Catalyst on him). With the amount of fast, strong centre-halves such as Van Dijk, David Luiz FB etc He can be left a bit redundant when it comes to utilising his pace.

However, if he gets a couple yards separation from his defender and the ball slips in behind or over the top, Marco will be on the end of them.

I cannot express how impressive his finishing is, finesse shots from tight angles or outside the box go in 9/10. Has rocket shots and volleys. Just serve him and he will finish it. Enough said.

His short passing and combination play is quite smooth. He is great as a target man so I suggest surrounding him with fast, agile players who can get the ball into his feet and look to combine with little 1-2's round the opposition defence, this allows the fast, players to get into space and Marco to spin off his man to try explode into the box or drop off to receive and strike on the edge of the box.

Long passing is average but for his base stat of 78 passing on his card it isn't going to be phenomenal however it is very consistent.

His dribbling for me even with an engine chem style was a bit inconsistent and could be a big factor on this cards downside, his stats of agility is fantastic but that 75 balance even with a +10 upgrade still made him feel like a truck when trying to turn. Not to mention having only 3* skills could put people off this card. However, the use of body feints creates spaces for him and maybe his "saving grace" as it allows him to get inside his man to strike and when you get even a yard on a defender to get off a shot, it almost always ends up in the back of the net.

Overall if you want a card that is a fantastic, fast, agile dribbler than I wouldn't recommend this card. However, he isn't the worst dribbler but against ICON defenders, midfielders or even just high rated defenders like David Luiz FB, he'll dispossess you 6-7 times out of 10.

Overall I grade this card a 7/10 for dribbling

Marco has some good physical stats such as that 87 Jumping combined with a 6 foot 2 inch frame and 94 heading accuracy makes him a lethal target man, also combining that 85 strength to hold the ball up makes him like I've said a great target man on FIFA this year. One downside to Marco would be that 80 stamina, it isn't great as sometimes in the dying moments of the game tied at 1-1 and I play a ball in behind and Marco struggles to get there due to this tho it isn't that bad in most cases.

What can I say, this man has one of the most broken shots on FIFA. His shot power and accuracy are insane, his high positioning makes him placed always where you need him. With a catalyst, his passing is fixed, as well as gets a huge boost to pace. His strength helps him hold off defenders to get a powerful shot off that will most likely blast into the back of the net. He can last a full 120 being played on stay forward and if you have a pacey striker as I do [TIF Werner] has a great link-up play with him, sort of becoming a second CAM when needed. His headers are a strong pro, seeing he's 6'2 with 87 jumping and 94 heading accuracy. Overall a strong traditional 9 striker and well worth the cost of his SBC and if you'd like him tradeable, worth the 1 million.

2.The decent pace with a chem style

3. Enough strength to hold off a defender or a key pass or shot

4. Dribbling, his balance is average but the rest of his dribbling stats are up to par, however with 3-star skills he won't be breaking ankles left and right\

5.Heading is very good, he is a very strong aerial threat, but could be beaten by OP defenders such as Van Dijk and others.